I Want A Standing Desk – from uplifting idea to startup success 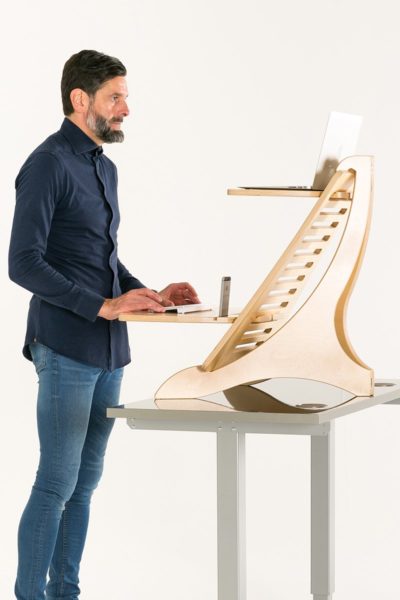 Entrepreneur Nick White from Lancashire and his company I Want A Standing Desk, was among the first early-stage product businesses to be backed by the British Design Fund.

The company designs, manufactures and sells height adjustable standing desks and since launching in Feb 2014 has supplied its innovative solutions to more than 300 primary schools across the UK, along with businesses, homeworkers, parents and the home-schooling community.

It was a conversation in Starbucks in 2013 that inspired Nick to launch his business.

When a personal trainer explained how, for the first time since having a baby, she had started to lose weight through using a standing desk, Nick’s interest was piqued. It was a concept he had never heard of before, but which was very appealing, so he was inspired to investigate the options.

Nick explains: “At the time, I was working in property development and was one of the millions of workers who are sat at their desk in front of a PC five days a week. As someone who likes to keep fit, I disliked it immensely and the idea of a standing desk really struck a chord with me. I wanted one! So, I began looking into the options.”

What he discovered was that the only products available at the time were adjustable height desks, priced anywhere from £700-£1000. They were also marketed as orthopaedic equipment, due to their benefits for those with back pain and aimed at a niche audience.

Nick saw a clear opportunity for a more flexible and affordable product that was more closely aligned with the fitness and wellbeing market. His research also revealed the broad range of benefits that a standing desk can result in, including how standing just 3 hours a day over a working year burns more calories than running 10 marathons!

“Originally, I thought I’d set up an ecommerce site for height adjustable standing desks – which is the range of Jack Desks we still supply today,” said Nick, “but I quickly recognised there was strong demand for a retrofit solution – something that could convert an existing desk into a standing one.

“At the time there was only one supplier offering this kind of product, which was made in China, constructed from metal and plastic and very heavy. It was a functional but not very flexible piece of kit. It was nothing like the standing desk I was imagining, so I just rolled my sleeves up and set to work creating something myself.”

Nick began work on his own idea and after a lot of hard work – and a huge learning curve that saw him take his first steps into areas such as design, manufacturing and packaging – the EIGER range of retro fitted standing desks officially went on sale in 2016.

EIGER standing desks are made from sustainable bIRch plywood and manufactured and hand-finished in the UK. Their unique, portable design means they can be used on any suitable surface – from an existing desk, to a kitchen table or counter. Priced at under £200, the desks are also highly affordable and can easily be transported between the home and office if required.

Nick continues: “Something else I noticed was that standing desks were only being designed for adults, when they actually have huge potential to benefit children also. So I went on to create a student version, which we began selling in 2017.”

The EIGER student classroom standing desk was an instant hit, proving particularly popular with primary schools and also SENCOs. For example, being provided for children with ADHD who find sitting still a challenge.

As for the future? Nick has ambitious plans for growth.

“I’m proud to say I Want A Standing Desk is the UK’s number one educational standing desk company,” explains Nick. “Moving forward I want to continue to build on our success in this space in the UK, but also to forge retail channels within Europe and further afield.

“Covid-19 has also massively accelerated interest in our products for the homeworker market, so we’re looking to capitalise on that in a number of ways, including forming partnerships with a network of dealers and marketing directly to both private and public sector organisations.”

Looking for investment for your product business?

If you have a well-designed product that fulfils a distinct need, or solves an important problem, then get in touch.  Applications for funding through the British Design Fund can be submitted here, or for more information email us using enquiries@britishdesignfund.co.uk.